Bathsheba Everdene (Carey Mulligan) states her position early in the latest big-screen adaptation of Far from the Madding Crowd (2015).

When faced with a sudden marriage proposal from the quiet, solid shepherd, Gabriel Oak (Matthias Schoenaerts), she boldly declares, “I don’t want a husband.” Bathsheba has a refreshing independence and bright intellect that Gabriel is immediately attracted to. He will become her most loyal friend and constant suitor. But for now, she will not marry him and explains, “If I ever were to marry I’d want somebody to tame me, and you’d never be able to do it.” Just what she means by this will become clearer throughout the course of the film.

Danish director Thomas Vinterberg’s beautifully seductive adaptation of Thomas Hardy’s 1874 novel is an example of the ‘literature to film’ genre at its best. These adaptations, or period dramas, seem to arrive on our screens in cycles. In recent years we’ve seen provocative interpretations of Jane Eyre (2011, Cary Fukunaga), Wuthering Heights (2011, Andrea Arnold) and Anna Karenina (2012, Joe Wright) released in close succession. Vinterberg’s Hardy arrives alongside the 2014 adaptation of Gustave Flaubert’s 1857 realist masterpiece, Madame Bovary, the first to be directed by a woman, the French-American filmmaker, Sophie Barthes (ColdSouls, 2009). It stars Mia Wasikowska as the titular Madame, Emma Bovary.

Both Bathsheba and Emma are characters born in a time when women had little, if any, control over the direction of their lives. But they are nevertheless two very different women, negotiating their worlds in distinct ways. Bathsheba’s a rare bird in Victorian England. Already strong-willed, she gains financial support for her independence when she inherits her uncle’s farm which allows her the freedom to live as she chooses, without provision from a man. Emma, on the other hand feels caged. Marrying Charles Bovary (Henry Lloyd-Hughes), an unambitious provincial doctor, she wonders if “her future is just a dark corridor with a bolted door at the end.” The domestic sphere is conceived first as a prison, and finally a tomb – Emma seeks liberation from its tedium in the intoxicating bliss of sexual affairs, fashion, and redecorating.

Adaptations of 19th-century novels remain fertile ground for filmmakers, especially those with women at their centre. And audiences continue to flock because their pleasures are immense: lavish costuming and props; the unembarrassed expression of emotion; fascinating women and seductive men; and a sly comfort for women today in the knowledge of how far we have come.

Women’s consumption patterns have been well documented over time – women’s magazines, soap operas, romance novels, and romantic comedies, are all designated as cultural products with a particularly feminine focus, and often denigrated because of this. Similarly, period dramas are often defined as a more rarified mode of “chick flick” despite attracting a wide audience beyond, because of their literary pedigree and the status of the directors who take the helm.

But overwhelmingly, the marketing of these films remains squarely aimed at women and shaped around so-called women’s interests – posters call them “love stories,” blurbs heighten the romantic elements over any social and class issues, and trailers are stacked with heaving bosoms and lusty stares. Love and romance are conflated, when in reality, many of these films present the two concepts as highly antithetical – love as constant and selfless; romance as arousing yet short-lived. To engage with these films simply as pretty trifles or portals of escapism, does them a profound disservice. They’re not respectable literary texts reimagined as ‘bodice rippers.’ There’s something much more interesting at work here.

In Far from the Madding Crowd, Bathsheba’s early speech establishes a dynamic that complicates the idea of romance that is later played out in her relationship with three very different men. In addition to Gabriel, Bathsheba must contend with the attention of her wealthy neighbour, the gentleman farmer, William Boldwood (Michael Sheen), and then the pretty rogue, Sergeant Francis Troy (Tom Sturridge). The gold buttons on Troy’s red uniform reduce Bathsheba to the “silly” girl she never wanted to be. He cuts a dashing figure and plays to her vanity to reel her in; Bathsheba discovering that she is not immune to romance after all. Boldwood, less self-assured but far richer, suffers from an excess of love that eventually completely unhinges him; despite respecting him, Bathsheba can never return his feelings, and any union between them would be little more than a business transaction. 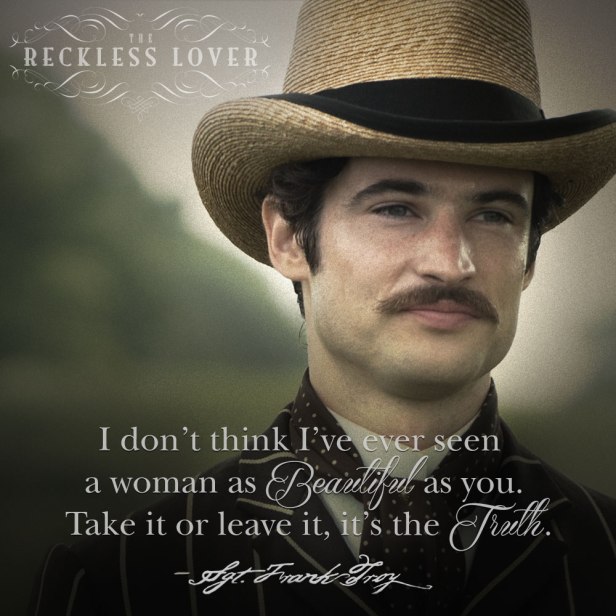 Despite these inducements, Far from the Madding Crowd is best categorised as an “anti-romance” narrative. It is a text – in both novel and visual form – that repeatedly warns against the excesses of romance (for both women and, in the case of Boldwood, men too). As they are in Madame Bovary, romantic tendencies in Far from the Madding Crowd are distractions from genuine connections and individual accomplishments; romantic love is presented as a problem to be solved, and often an insurmountable hurdle even leading to death.

Gabriel’s love for Bathsheba is something else, distinguished by its humility, constancy, and stability. He is Bathsheba’s “first sweetheart” and by the end of Far from the Madding Crowd he’s the last man standing. While Troy and Boldwood offer Bathsheba all the trappings of romance – flattery, poetry, dancing, jewelry – Gabriel offers her the closest thing to a genuine relationship, one that is based on mutual respect and shared interests. This may sound dull or dispassionate on paper, but the casting of the very masculine, very sexy Schoenaerts works against this reading, positioning him as the most warm and physically attractive of the three men (at least for this viewer). It’s impossible to see him as a consolation prize.

Gabriel is also appealing because he talks to Bathsheba frankly, in a way the other men, so invested in complimenting her with their own gain in mind, simply can’t. He is always on Bathsheba’s side and only wants what is best for her – he believes in her; he sees her flaws and loves her all the same. And importantly Gabriel never behaves as if he is diminished in any way by the woman she is. Even though Bathsheba is his boss, they are equals. In the end, Gabriel “tames” her simply by giving her permission to be herself.

Vinterberg’s film is a triumph because from the very start we are on Bathsheba’s side. But in Barthes’ vision of Madame Bovary, empathy is less prolific. Flaubert is partly to blame – he created a great literary anti-heroine. Emma behaves ‘badly’ and makes poor choices that implicate her in her own demise.

Emma is attractive to us because she’s a deeply complex character – depressed, capricious, and unable to be happy. Despite understanding the social limitations of Emma’s world, Barthes’ directorial choices don’t give sufficient weight to Emma’s enchantment with the sentimental romance novels she’s imbibed since she was a girl. It’s a desire to experience – every minute of every single day – the heightened emotional states she encounters in these pages, that fuels her dissatisfaction even more than the restrictions of social mores. As Flaubert writes, when Emma is embroiled in her own affair, she is completely occupied by the charm of the seduction and imagines she has become one of the adulterous women in her novels, “fulfilling the long daydream of her youth, by seeing herself as this type of amorous woman she had so envied.” Often described as a flighty character, Emma’s head, when she takes it out of her books, is high above the ground, floating in the stars.

It is true that Emma is a thoroughly modern heroine – living for the now, chasing transitory pleasures in her desire to feel alive, with little concern for tomorrow. But chasing daily passion doesn’t open the world to Emma. Instead, the walls close in. There’s nothing romantic about her destruction – romanticism is her greatest enemy; she is tormented by her endless cravings. Ultimately, Emma falls not because she’s compelled by an intense, tragic love for the Marquis (Logan Marshall-Green) or Léon (Ezra Miller), or the crippling debts she owes to Monsieur Lheureux (Rhys Ifans), but because she keeps running towards anything that evades her greatest fear, of a life spent “standing inert.”

There is a key moment in Flaubert’s novel where Emma decides, momentarily, that she needs “to be able to lean on something more solid than love.” Emma sees she has incorrectly conflated her reckless romantic escapades with love and that they are causing her to stumble. Poor Emma never finds that solid thing to lean on. But Bathsheba, who sees the error of her romantic flights of fancy as they are flying, does – in the arms of a man who has his feet planted firmly on the ground.

3 thoughts on “Beyond the ripping bodice”