PATERSON is a unique film about writers and writing

It begins with a bowl of cereal and the contemplation of a box of matches. Ohio Blue Tip, to be precise. It’s a Monday morning and Paterson (Adam Driver) sits quietly, eating his breakfast, while his wife, Laura (Golshifteh Farahani), sleeps in their bed. He picks up the matchbox, turns it over, and returns it to the bowl. As he walks to work, phrases take shape. Spoken in Driver’s deep, resonant voice, they then appear on the screen:

We have plenty of matches in our house

We keep them on hand always

The poem grows throughout the day. Paterson steals some time writing in his notebook before starting his shift driving the number 23 bus around Paterson, New Jersey. Ideas come as he drives, and later, at lunch, when he sits before the Passaic Falls. By the end of Monday, Paterson has created “Love Poem”—starting with a seemingly bland object, he has wrought art from the minutiae of his life, without angst. It’s a muted introduction to Paterson the poet, but then Jim Jarmusch’s Paterson is not like any other film about writing that you have ever seen.

For the most part, movies, even some great ones, get the writing life quite wrong. They repeat familiar images: a writer hunched over a desk for hours on end, smoking, often also drinking, consumed by the act of writing and nothing else. Writer’s block is mandatory, writers’ egos fragile, as plays out in Spike Jonze’s Adaptation (2002). There’s often emotional instability attached to this uncertainty; Barton Fink (1992) turns writing into a perilous act, a dark descent into madness. A similar anxiety propels Paul Dano’s writer in Ruby Sparks (2012). But after the frustration, for the fictional writer there is always release. When the writing starts, it’s frenetic, fingers seemingly working independent of thought. In most movies, the writing process is imagined as nothing but a series of extreme highs and devastating lows and not much in between. The inaccuracy is exhausting to watch.

The truth is actually more mundane, and Paterson presents a scenario closely attuned to reality. Jarmusch gives us seven days in the life of a man and a city. Paterson is, as a young girl observes, “a bus driver who likes Emily Dickinson.” Played with substantial warmth and intelligence by Driver, Paterson the man is calm, unpretentious, and patient. We don’t see him mired in fits of despair or self-obsession; he doesn’t respond to writer’s block with booze, like Ray Milland’s Don Birnam does in Billy Wilder’s The Lost Weekend (1945). He doesn’t neglect or exploit his important relationships, like Harry Block in Woody Allen’s Deconstructing Harry (1997) does, for creative purposes.

Paterson hasn’t made a mess of his life for art. When asked how he is, the answer is always the same: “OK.” Little seems to alter his mood. Paterson lives a gentle life with Laura and her bulldog Marvin; they encourage each other’s creative pursuits, but never push too hard. While Laura wants others to see Paterson’s poems—“they should belong to the world,” she says—he isn’t seeking recognition. Paterson doesn’t seem to write for anyone but himself.

Paterson is a working-class writer—another cinematic rarity—and as such, his writing is embedded in the rhythms of everyday life, within a routine. For him this means waking around the same time every morning, eating breakfast, walking to the bus depot, working, walking home, straightening the mailbox, eating dinner with Laura, taking Marvin for a walk, and stopping for a beer at Doc’s bar. His writing fits within a structure that Jarmusch bestows with quiet dignity, not tedium. 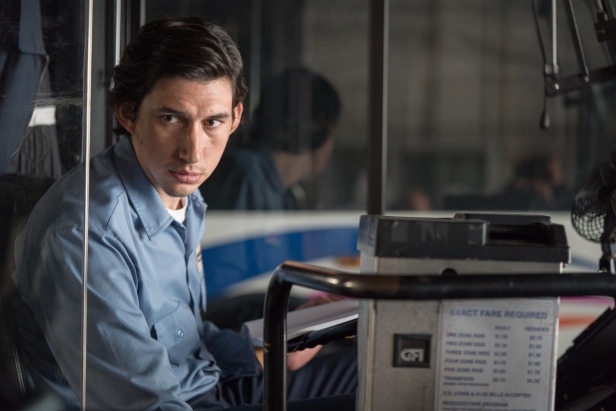 This routine is important because it provides both a well-organized day and financial stability. While it’s true that writing is a vocation and should be taken seriously as such, it’s often impossible to obsessively devote all of one’s time to it, especially if there are bills to pay. While Nancy Meyers creates a fantasy of bountiful riches in Something’s Gotta Give (2003), installing Diane Keaton’s playwright in an expansive Hamptons’ beach house, most writers’ lives are far less glamorous. Economic imperatives within a marketplace that pays little for poetry or for prose means most writers have to do other work, whether it’s teach, edit, sell books, or drive buses, in order to eat. Writing certainly is something a writer is constantly doing—like Paterson does, in his head, as he drives or walks—but it’s not the only thing a writer does or is.

Paterson’s repetitive job leaves him plenty of mental space to write. As that first scene at the kitchen bench makes clear, routine doesn’t stifle creativity, but instead opens a space for it to flourish. It makes Paterson more observant, and his job helps, with its attention to movement, places, spaces, and people. He’s constantly watching—even when he and Laura see a movie on Saturday night, Paterson watches other couples, rather than the screen. Poetry, he understands, is in the details. And he’s expert at catching these moments and anchoring them in language. When “Love Poem” is complete, it’s the visual manifestation of the William Carlos Williams dictum, “No ideas but in things,” a statement of intent for poetry embedded in the concrete world.

Williams is Paterson’s poetic guide. Laura jokes about his love of “Carlos William Carlos,” and Paterson is often pictured holding his Collected Earlier Poems as a kind of talisman, reciting “This Is Just to Say.” Williams lived and worked near Paterson, and wrote an epic, five-volume poem called Paterson (1946-1958), which begins with the image of the Passaic Falls, and likens the city to a man (“only one man—like a city”). Paterson eats his lunch every day by the waterfall, and his poetry captures the immediacy of his experience of the world, just as Williams’ poetry did. Williams, like Paterson, was two things at once—not just a poet, he also worked most of his adult life as a family doctor.

Jarmusch implants routine into Paterson’s DNA. Each day follows an almost identical shape, repeating imagery. An atmospheric score, by Carter Logan, is also circular. The film has a tone and form close to the poetic style it champions—intimate camerawork, posed above figures, patiently watching. There’s a minimalist elegance to the framing, such as the repeated shot of the chair in Paterson’s bedroom, on which his clothes for the day sit waiting to be worn.

Importantly, Paterson offers a counter-American narrative of success that isn’t attached to fame, money, or awards. It understands that the reasons people create are often more mysterious. Paterson writes for himself, and as an ex-Marine, perhaps for reasons he can’t articulate. We don’t need to know why. Paterson engages with a question many writers ask themselves: If I never publish my work and no one reads it, does this mean I am not really a writer? What Jarmusch demonstrates is that making a commitment to a creative life in some form is what matters; that you become a writer simply through the routine commitment to do the writing itself. The film’s final events suggest that writing is ephemeral—as Paterson says, “just words, written on water.”

Toward the film’s conclusion, Paterson sits alone before the Passaic Falls. A Japanese tourist, brandishing a copy of Williams’ Paterson, joins him. He’s a poet too, and recognizes Paterson as a kindred soul, even when Paterson says he isn’t. “I’m a bus driver,” he declares. The man thinks this is funny, poetic even, and gives Paterson a blank notebook from his collection. “Sometimes empty page presents the most possibilities,” he says. Paterson is moved by the gesture. Later, a new Monday begins; the routine continues. Paterson isn’t alone. He’s one of many molecules in a world that values community over competitiveness, and connection over isolation—the perfect ecosystem for creativity.

* A version of this essay was originally published by Fandor on December 28, 2016

4 thoughts on “Ideas and Things”

Join 3,886 other followers
Follow IN A LONELY PLACE on WordPress.com