“A performance, when it deserves to be considered great or important, is always entirely made up of the actor.” – Orson Welles

Whether Olivier Assayas intended it or not, Clouds of Sils Maria (2014) is a film that marked a shift in the critical and public perception of Kristen Stewart. It signaled her move towards more serious roles and our more serious interest in her career. During her tenure with the Twilight franchise, Stewart was regularly maligned for her fidgeting and slouching, for appearing blank and detached. Critics often described these traits as weaknesses when she was playing Bella Swan. But in her work with Assayas, including their most recent collaboration in Personal Shopper (2016), these elements emerge as strengths that make Stewart an interesting and unpredictable actress to watch.

Great acting has never been about concealing the actor behind the character. It’s about the actor revealing themselves in that character. Stewart’s style is, and always has been, concerned with authenticity above all else, with appearing like she’s not acting at all. It’s a style that is instinctive and undemonstrative, natural and direct, and it’s lent itself to suggestions that she’s not doing much on screen. But just like the so-called natural makeup look, an unaffected performance style disguises the careful application of craft that goes into its creation. Stewart is skilled at observing and responding, even if she doesn’t exhibit herself in conventional ways. She’s not showy; her performances contain few explosive emotions or heightened passions. Stewart’s style is cool, restrained, and unaffected. She excels at communication in a minor key, building characters from small gestures and controlled expressions. 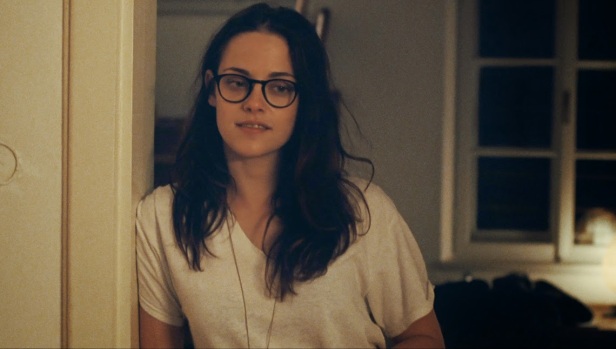 Importantly, we also see Stewart exhibit many of these gestures and expressions “in real life”. When we see Stewart fidget in a film, we recognise the same behaviour from her interviews or red-carpet appearances. As a result, we feel only a small gap between Kristen Stewart The Star and Kristen Stewart The Actress. In this way, Stewart both reveals and conceals herself on screen. Her style reminds us of what Orson Welles said about acting, that “what you’re really doing is undressing yourself, and even tearing yourself apart, and presenting to the public that part of you which corresponds to what you are playing.”

Stewart understands that she can’t ever truly abandon her star persona, so she repeatedly lets it bleed into her performances. She’s said that she’s not a character actor, but an actor interested in finding “herself” in her roles: “All I want to do is convey myself.” But of course Stewart is also an actress crafting a fictional performance. It is this dynamic, between presence and absence, that makes Stewart so fascinating to watch. This is also what helps make Val, her character in Clouds of Sils Maria, so enigmatic a character to encounter.

Clouds of Sils Maria’s opening scene is a microcosm of Stewart’s acting style. Val is onscreen, alone, slouching into the natural frame created by the corridor between a train’s cabins. As she talks on her cell phone, she bites her lip, listens, and reacts. The camera doesn’t move. Stewart does little, but we have no reason to look away. The camera’s stillness invites us to focus on her image. As she juggles multiple phone calls and publicity requests, we see that Val is smart, competent, and in control. Yet as the narrative progresses, we learn little of the contours of her life beyond her interactions with Maria Enders (Juliette Binoche), the international actress for whom she works as a personal assistant. By the time Val vanishes from the film in its third act, she’s still a mystery.

With Clouds of Sils Maria, Assayas collaborates with Stewart to capitalise on our extra-textual knowledge of her. He draws on her star persona so that the line between Stewart and Val is an unstable one. Throughout Clouds of Sils Maria, star and character overlap and collapse into each other. Stewart’s expressive tics and traits are present in Val. Val’s costume reminds us of Stewart’s own familiar casual uniform of jeans and t-shirt.

Eventually, there is also a correspondence between Stewart and her character in the details of the film’s plot. Assayas has Val call the paparazzi “cockroaches,” which is Stewart’s own term for them. He introduces a character — a 19-year-old American actress called Jo-Ann Ellis (Chloë Grace Moretz) — whose public persona has been distorted by voracious tabloids and TMZ scandals. This circus of celebrity is something Stewart understands first-hand. She was incessantly hounded by the media when she dated her Twilight co-star Robert Pattinson, and even more intrusively during their subsequent, spectacular break-up.

“She’s not completely antiseptic like the rest of Hollywood,” Val says of Jo-Ann, a view many of us also have about Stewart. In this way, Jo-Ann offers a window into Stewart’s persona as it was shaped during her Twilight years. The sequence in which Maria and Val head out to see Jo-Ann’s latest film, a science-fiction blockbuster in which she plays a red-wigged mutant, amplifies this. The film is a 3D X-Men rip-off, complete with outlandish costumes and convoluted dialogue. After the screening, Maria and Val argue about its value and specifically, the quality of Jo-Ann’s performance. Maria, laughing at the excesses, questions the artistic integrity of mass-market entertainment, in general. She ultimately finds little to recommend it. But Val doesn’t consider art and entertainment mutually exclusive concepts. She sees social commentary and layers of meaning even in popcorn fare.

Who are Maria and Val talking about here as they discuss the merits of acting in big-budget franchise films? While the conversation is ostensibly about Jo-Ann playing a mutant, it soon sounds like it could be a conversation about Stewart playing a vampire. The parallels between Jo-Ann and Stewart are clear. Assayas positions Maria in the role of critic, voicing opinions similar to those expressed by the anti-Twilight camp. Val takes the opposing view, allowing Stewart to defend her own past choices as valuable, artistic ones. When she says of Jo-Ann’s performance, it’s committed, “there is no distance there,” she could just as easily be talking about her own acting style. Val concludes that Jo-Ann is “brave enough to be herself. At her age, I think that’s pretty fucking cool.” Here Stewart sounds exactly as she does in countless interviews.

Maria is set to star in a new production of Maloja Snake, the play that made her career as an 18-year-old actress. Back then, she played the antagonist, Sigrid, a young woman who schemes and manipulates her infatuated boss, the older Helena, to the point of suicide. Maria, now in her 40s, will play Helena in this new production opposite Jo-Ann’s Sigrid. By having Maria and Val decamp to the Swiss village of Sils Maria to run lines for Maloja Snake, Assayas pushes the layers of Clouds of Sils Maria’s meta-narrative even further.

The parallels between Val/Sigrid and Maria/Helena are exposed early on. Like Sigrid, Val is the personal assistant to an older, more powerful woman. As the tensions and desires between Sigrid and Helena are exposed, we wonder if a similar dynamic exists between Val and Maria — situations and dialogue start to mirror their own relationship. The play exposes a fraught power dynamic between Val and Maria. Reading as Sigrid, Val suggests to Helena/Maria: “You talk about your insecurities, your vulnerabilities. You open up to me. I’m not exactly sure why.” With exchanges like these, it becomes impossible to know whether the words are theirs or from the play. 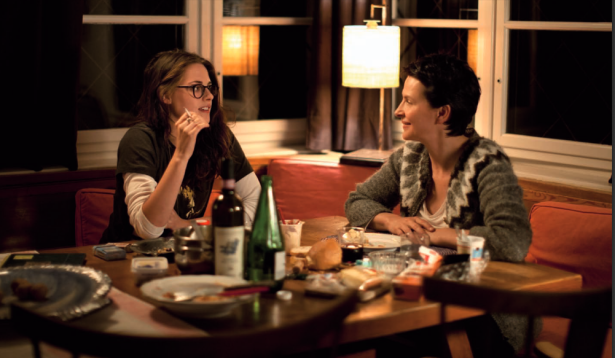 Stewart’s blankness elides the space between Val and Sigrid. For Stewart, so skilled at playing two things at once, this dynamic engages directly with her persona. Just as Stewart finds herself in Val, Val seems to find herself in Sigrid. Val disappears into Sigrid and the line between them breaks down, as it does between Maria and Helena. Most of the time, Val barely glances at the script, as though she knows the words by heart, as if they belong to her. “I noticed the second you hired me, and I’m sorry, but I’ve had fun playing with it. You’ve let me play with it,” she reads, detailing Sigrid’s manipulation of Helena’s desire for her. There’s no pretense in her reading, and its frankness has an unsteadying effect. When Val heads to Lake Como for the night to hook up with a photographer, she asks Maria if she’s jealous: “Of my time, my thoughts, my affection.” Is Val reciting lines from the play? Are these her words? That we don’t know either way only adds to our confusion.

Assayas does not use Stewart as a model for Sigrid, as he clearly has in his construction of Jo-Ann. But he lets Val disappear into Sigrid, and in turn, highlights Stewart’s tremendous honesty as a performer. This merger spotlights just how close Stewart gets to every character she plays. Yet for all its openness, Stewart’s performance in Clouds of Sils Maria is a puzzle — we accept her as an actress who hides nothing, yet we are still left wondering just who Val is. Our attraction to  Val, and to everything Stewart does on screen, echoes Maria’s explanation of the attraction between Sigrid and Helena: “It’s harder to see, and it’s more profound. And truer.”

6 thoughts on “To reveal and conceal: Kristen Stewart in Clouds of Sils Maria”